The total global production of farmed marine shrimp increased 86% in the past 10 years, reaching more than 6.5 million tons in 2019 and a value of nearly 40 billion U.S. dollars.

Much of the industry growth over the past 30 years has been achieved through horizontal expansion, that is by expanding the footprint of low-input extensive and semi-intensive farming sectors. However, vertical expansion, by means of increased intensification of farming, provides an alternative approach.

Sustainable intensification is a promising approach to increase shrimp production, when there is increasing competition for the use of finite resources, but also when there is a need for a more ‘controlled biosecurity’ environment similar to other intensive meat producers such as poultry and swine.

The move towards increasing intensification by industry was not only fostered by increasing shrimp demand, but by consecutive disease outbreaks.

“Shrimp nutrition and breeding are other areas that have directly enabled and improved intensification and will continue to be critical for the ongoing growth in this sector.”

Overfeeding can quickly overload the system and underfeeding or inadequate dietary formulations can result in nutrient deficiencies.

An understanding of synergies between the related areas of production systems, nutrition, and breeding is crucial to produce healthy, fastgrowing shrimp, and to ensure the success of commercial operations.

This article reviews the current production systems and strategies being used for Litopenaeus vannamei super-intensive shrimp farming; explores the advances and key contributions that nutrition, breeding, and pathogen surveillance are having towards intensification, discusses the synergies across these different areas, and provides future perspectives for super-intensive shrimp culture.

Regardless of the system or strategy, the intensification process has led to greater adoption of chemical sanitation protocols and pre-treatment of water, as well as heightened use of water supplements during the culture cycle.

Water supplements are used to adjust and stabilize the water quality parameters, microbiological and environmental conditions, as well as to suppress the growth of pathogenic microorganisms.

As per the ‘microbial loop concept’, bacteria in biofloc play a key role at the bottom of the food chain by utilizing dissolved organic matter.

Bacteria can re-incorporate up to 50% of the carbon released by phytoplankton, accelerating mineralization and making the carbon available to higher trophic level organisms.

This recycling process is especially important in superintensive conditions with limited water exchange and with high loads of nutrient inputs.

Such advantage could be employed to decrease production costs in BFT culture and are enabled by the continuous availability and consumption of natural food sources in the form of the ‘bioflocs’ by the shrimp.

“In large-scale operations, RAS can be criticized for the large volumes of water required for production. In this regard, techniques with more efficient water use have been tested and developed and include recirculating aquaculture systems (RAS) and hybrid systems.”

The hybrid approach incorporates some RAS equipment and filtering devices into BFT operations. Depending on the environmental conditions, such as levels of suspended solids, microbial management, C:N ratio, N:P ratio, and control of light intensity, the hybrid system can be photoautotrophic-based (greenwater RAS) or heterotrophic-based (BioRAS).

The shrimp nursery phase is a period of rearing between hatchery and grow-out. The adoption of a super-intensive nursery phase can support more production cycles per year, optimizing the land use and improving the predictability and efficiency of production.

The co-culture of low trophic species combined with shrimp has the potential to consume a portion of the suspended or settled particles in the culture system, and act as a bioremediator against pathogenic organisms.

Moreover, there is a significant opportunity to co-culture plants with the shrimp. These approaches are known as integrated multitrophic aquaculture.

“In conditions where the nutrients are mostly provided by the compounded feed rather than natural productivity, the key criteria to assess the cost of feeding should be overall production efficiency. “

It is unknown whether nutrient demands of shrimp are met under super-intensive conditions, though it is likely that the provision of essential macro/micronutrients and modified feeding management strategies could assist animals to cope and thrive in the more challenging super-intensive farming environment.

While ‘standard formulations’ designed for traditional systems might be convenient in terms of feed mill logistics, it is likely that tailored feeds can lead to improvements in feeding efficiency and water quality in the grow-out environment.

Regardless of the source of alternative proteins, the differences in nutrient digestion need to be carefully evaluated and are important considerations when selecting ingredients for super-intensive shrimp aquaculture.

Besides, high stability of diets in water becomes increasingly important in super-intensive systems where the breakdown of uneaten feed particles can lead to major issues with water quality.

Selection of carbohydrate ingredients with high digestibility and resulting pellet stability would be a useful strategy to manage diet quality for super-intensive systems shrimp diets.

In the context of super-intensive systems, a recent review revealed feed additives have an important role in minimizing antibiotic use in shrimp culture and other aquaculture industries as well as reducing the incidence of disease and promoting growth.

“The mechanisms by which feed additives have such beneficial effects on shrimp health include stimulating the innate immune system, providing micro-essential nutrients, and maintaining a healthy microbiome.”

As formulated feed is a major production cost of shrimp farming, the quantity of feed and frequency of feeding are key factors that drive economic success or loss in any production cycle. The use of novel feeding technology, such as timer-feeders and acoustic demand feeders, can dramatically improve growth and feeding efficiency while reducing labor costs.

Breeding has an important role in super-intensive farming to ensure that the cultured shrimp stocked into the rearing systems are suited to life in a more crowded and nutrient and microbial laden environment, and to ensure that the shrimp performance can be enhanced through an ongoing process of genetic improvement.

While domestication provided the vehicle to achieving SPF, it has also opened opportunities for other breeding advances through genetic change within the cultured shrimp breeding lines.

Genetic improvement has been achieved through ‘directed genetic selection’ for traits yielding production and financial benefits within commercial farming environments.

“Pathogen surveillance is a key element of farm biosecurity and is even more critical in super-intensive systems where rearing stresses and economic risks are heightened.”

There are several approaches for pathogen surveillance including point-of-care (POC) methods that can be used by farmers to obtain real-time data and private and government laboratory services based on PCR or histological technologies.

Besides pricing and availability constraints, the choice of breeding lines that super-intensive farmers might decide on will be influenced by the risk posed by pathogens and other stressors within their farming system.

This depends on the level of biosecurity and management able to be maintained in their farming system and their appetite for risk, as well as the trade-off in reduced growth if using disease or stress-tolerant lines.

Consequently, for efficient commercial operations, there are many environmental benefits of using super-intensive shrimp farming approaches on grounds of resource efficiency.

Looking more broadly across the shrimp industry production chain, the shrimp hatchery sector that supplies the super-intensive farming industry is commonly criticized on animal welfare grounds due to the common use of unilateral eyestalk ablation of female broodstock; this technique used for the purpose of stimulating female gonadal development and synchronizing egg and nauplii production in hatcheries.

“‘Ablation’ is of growing consumer concern and currently prohibits acceptance of products into certain markets.”

While the welfare concerns over ablation should boost the interest in working with breeding companies to develop alternative approaches to de-risk future and growing consumer concerns over the practice but could also work as an undertaking to modernize the shrimp industry and build-on some of the positive social license credentials of superintensive farming.

Considering the high load of nutrients in the form of uneaten feed, feces, and diverse organic matter in super-intensive systems, from an environmental and social license perspective, there is a need to convert these outputs into high-value products such as microbial biomass or complementary aquatic protein, by applying circular economy approaches.

Effective intensification of shrimp farming, as in other cultured terrestrial and aquatic species, requires that the cultured animals have a health status and genetic characteristics suited to thriving in these environments.

“Operating in parallel to breeding, the risks of pathogens outbreaks and disease can be reduced by proper feed management and inclusions of feed additives and functional ingredients in formulations.”

Development of super-intensive farming in ways that align to enhanced environmental sustainability, and which consider growing consumer concerns of animal welfare, product quality, and food safety, will be important to avoid excessive critique of the industry; to allow ongoing access of super-intensively produced products to many global markets; and to ensure the industry takes a development path that is responsible and looking to the future. 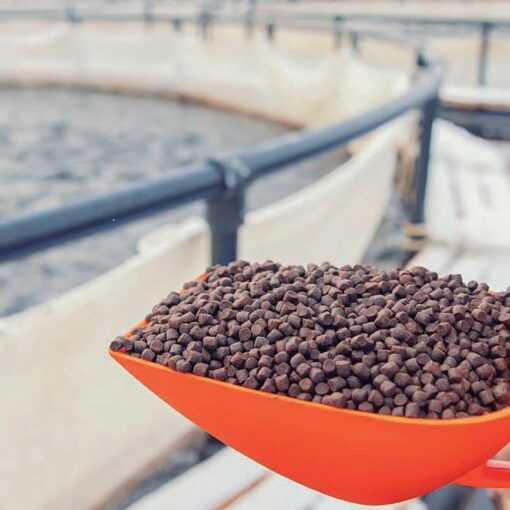 BIOAQUAREEF By: Rendani Luthada-Raswiswi, Samson Mukaratirwa and Gordon O´Brien Fishmeal prices have been raised even further because of competition with domestic animals, […] 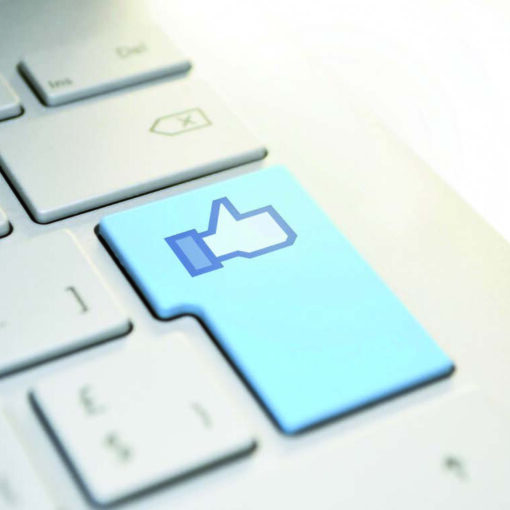 BIOAQUAREEF By: Sarah Cornelisse* You may be familiar with the saying, “you cannot manage what you don’t measure.” As with all aspects […] 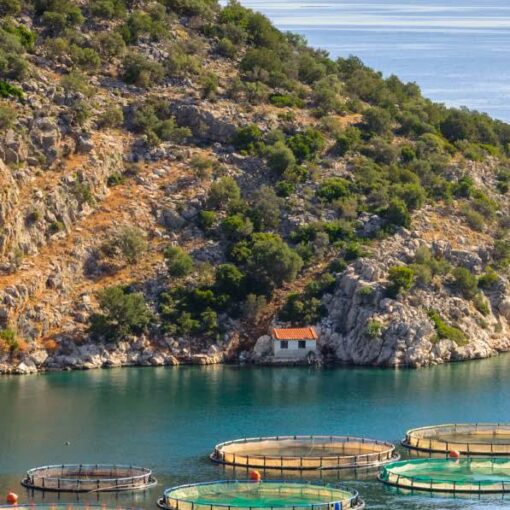 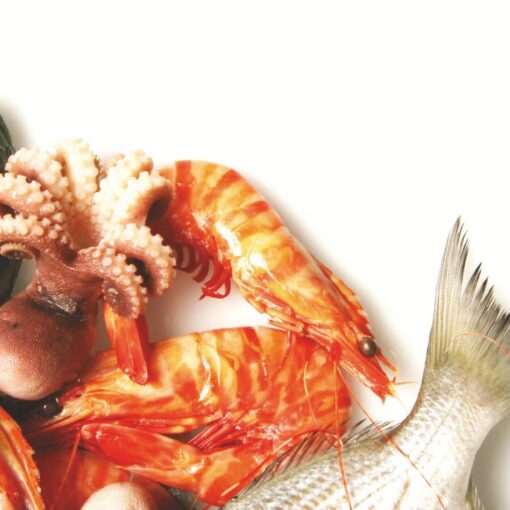 BIOAQUAREEF Efficient disease management and mitigation strategies are not possible without understanding the immunological aspects of the cultured animal. During the larval […]